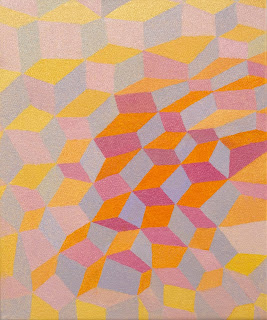 
Alexandra Kennedy has a practice based in premises which emerged with Conceptual Art in the 1960s and 70s. A process is often established for a work – or series of works – and the making represents an attempt to follow the ‘rules’ set out by the process. Realised work has a large element of chance, as these rules are subjected to interferences which occur as part of the making of a work. Colour is a central element, and again, initial rules about how colour will be utilised are often break down midway through the making of a work, as chance in mixing and in inclination as work progresses take over.

Alexandra lives in Dunedin, New Zealand. She has an MFA in Painting and regularly exhibits internationally. Recent projects include curation of an exhibiton for Antwerp Art Weekend (May 2017) and a solo show with Abstract Projects, Paris, France (July 2017). She works at Dunedin School of Art where she is Postgraduate Coordinator and a Principal Lecturer.

Factory 49
Marrickville Sydney, NSW, Australia
Since 2006 Factory 49 has provided a greatly-valued platform for experimentation and exposure for artists whose practice is materials-based or process-driven, or whose work sits in the reductive, concrete and non-objective traditions. Managed by practising artists Ro Murray, Tara Lyubicic, Mandy Burgess, Elisa Bond and Pam Aitken, the program includes two exhibition spaces and an outside wall series. The International Board is supported by Jacek Przybyszewski, Amarie Bergman and Lisa Sharp. We have residency projects in Paris which are one month each and exhibitions that run for two weeks. For more information visit https://factory49paris.blogspot.com Factory 49 acknowledges the Traditional Owners of country throughout Australia and recognise their continuing connection to land, waters and culture. We pay our respects to their Elders past, present and emerging.

Our mission is to provide artists with opportunities to expand their practices, to share and collaborate and to develop connections across Australia and around the world.
Our Sydney program includes the Front Showroom, which runs on a two-week changeover, the smaller Office Space, in which exhibitions go for four weeks, and a fun under-the stairs exterior wall, which changes every three months.
Floorplans available here.
If you have a project that fits in with our non-representational program, send an email to factory49@optusnet.com.au with a brief outline of your practice, examples of the work you wish to exhibit or other details of your proposed project and we'll get back to you with more information.